Some bridges in Singapore are really quite spectacular – from colourful and colonial, to one that looks like DNA, and even a wave bridge. Some stretch across jungle and sea! At 36 metres above ground, Henderson Waves is Singapore’s highest pedestrian bridge. But it’s not the longest, despite being 274 metres from end to end. That honour goes to the Helix Bridge in Marina Bay (280m). You’ve probably seen or been on most of them, but we thought we’d give you a few more stats and facts you might not know.

We find out more about the distinctive Henderson Waves bridge that connects two forested areas in the island’s south.

Who was Henderson? Aside from Henderson Waves, there’s also a Henderson Hill, Henderson Road and Henderson Crescent, presumably all named after one person. One online commentator suggests the name comes from Henderson Brothers Rubber Factory, in operation here in the 1920s. But the book Singapore Street Names traces it back to George Henderson, a businessman who worked with Hamilton, Gray & Company in the 1850s. We struggled to find out much more about the man, though his signature does appear on the base of an ornament in the Peranakan Museum.

The “Waves” part of the name is much easier to understand! Sitting on steel arches, the footbridge is built in the shape of a wave, with a distinct curl overhead, and undulations throughout its length. The curved timber ribs are made from Balau, a dense hardwood that’s native to Southeast Asia.

The bridge forms part of the Southern Ridges Walk, around 10km of trail that connect three prominent parks: Kent Ridge, Telok Blangah Hill and Mount Faber. It’s not the only cool walkway from which to explore this beautifully green part of Singapore: there’s also a zigzagging metal structure called the Forest Walk, plus an Earth Trail and Canopy Walk for exploring different levels of the rainforest. The curves and ribs of Henderson Waves form shell-like alcoves where you can sit and take a mid-jog break while enjoying the city views; or, if you’re having an evening stroll, you can wait to see the pretty LED light display, which comes on at 7pm.

The idea for linking Singapore’s southern ridge with various walkways was conceived in 2002; the project cost S$25.5 million – but it’s exceptional!

We’ve already mentioned Singapore’s longest pedestrian bridge; it’s also the most futuristic-looking! With its spiral shape inspired by the structure of DNA, the bridge opened in 2010, winning a prize at the World Architecture Festival Awards in the same year. It’s impressively lit by LED lights at night and is a favourite spot for an Insta snap. Singapore’s most remote pedestrian bridge, the TreeTop Walk Suspension Bridge at MacRitchie Reservoir literally puts you in the middle of the forest canopy. The views of greenery seem to roll on forever here; you’ll feel a million miles from the city. Reach the bridge via a 3km hike from the carpark at Venus Drive, just off Upper Thomson Road. The bridge is currently closed for maintenance and due to reopen in May 2021; check the National Parks website for updates. 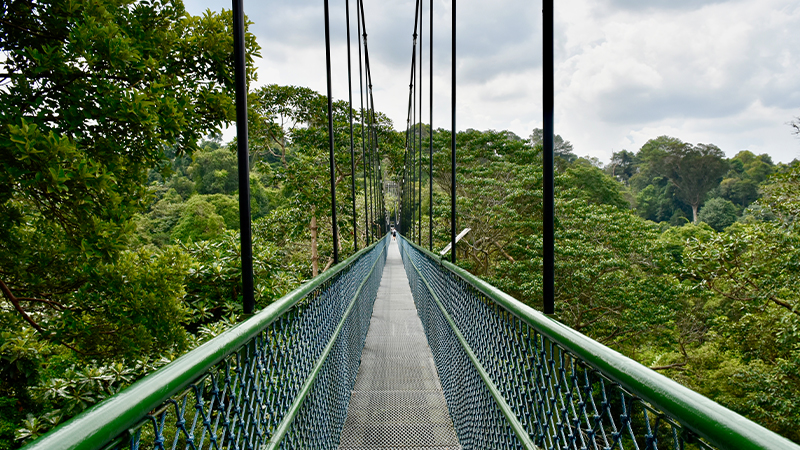 Opened next to the Esplanade Bridge in 2015 as part of Singapore’s 50th birthday celebrations, Jubilee Bridge links the Esplanade with Merlion Park. The opening date was brought forward by a month to coincide with the state funeral procession for Lee Kuan Yew. This was particularly appropriate, as construction of the pedestrian bridge was Mr Lee’s idea in the first place! For a shakier bridge-walking experience, try the Sentosa Suspension Bridge. This narrow rope bridge crosses from Palawan Beach to a tiny island dubbed the “Southernmost Point of Continental Asia”. You can climb a timber watchtower for a view of the beach and the passing ships. Note: The bridge is closed temporarily as part of COVID-19 safe management measures. Singapore’s 73rd national monument, Cavenagh Bridge next to the Fullerton Hotel has been a pedestrian-only throughfare since 1910. (The sign erected to warn vehicles from crossing is still visible.) The structure dates to 1869, when it was built to replace a ferry service across the river. There are some eye-catching sculptures near the bridge; look for one of boys leaping into the river, and another of Singapura cats. After the train line from southern Singapore to Woodlands closed in 2011, the Bukit Timah Railway Bridge was suddenly fair game for pedestrians to walk across. The old black iron bridge is a photographer’s favourite and has just received a fresh paint job as part of restoration work under way along the whole Rail Corridor.

Alkaff Bridge is a 55m pedestrian link across the Singapore River at Robertson Quay. While it was built in 1997, it didn’t get its vibrant makeover until 2004, when Philippine artist Pacita Abad used 55 different colour shades and 900 litres of paint to bring the structure to life. The bridge is shaped like a tongkang, one of the light boats that carried goods on the river in Singapore’s early days.

This article first appeared in the January 2021 edition of Expat Living. You can purchase the latest issue or subscribe, so you never miss a copy!

20 places to walk and hike in Singapore
Dog parks in Singapore: walks and runs
Escape to the reservoirs!