Living in a city, we all need to escape to the country every now and then. The reservoirs in Singapore are some of the best places to walk and run here or even fly a kite! Take a picnic and chill next to the water when you want to enjoy open horizons and a bit of nature! Read on for a few of our favourites.

This beauty is the oldest and biggest reservoir in Singapore (completed in 1868), sitting smack dab in the middle of the country. There’s a lovely waterside trail that’s a very popular place to walk and run.  You can spot a lot of wildlife, including turtles and monitor lizards – and plenty of macaque monkeys. (Tip: Carry a rubber snake with you and the monkeys will leave you alone!)

There’s also the very cool TreeTop Walk on the north side of the reservoir, as well as the Active, Beautiful, Clean Waters (ABC Waters) Learning Trail, which is an activity-based tour to teach students about water resources and sustainability efforts. At the weekend, mornings are very crowded, but it’s shaded enough to walk in the afternoons too.

Did you know: The reservoir takes its name from municipal engineer James MacRitchie who oversaw a major expansion of the facility in the 1890s. This former sand quarry was turned into a reservoir in 1986. Located in the east, it has a great treetop obstacle course for adults, and a kiddie version, too. You can also rent kayaks and canoes and take them out on the water or even try waterskiing or wakeboarding. The park is massive and well-shaded so it’s also a favourite for cross-country running – both training and events. Want to take a walk back in history? Check out Singapore’s second oldest reservoir, dating all the way back to 1912. The forest surrounding its banks is pretty cool, with a mature secondary rainforest containing rubber trees and oil palms. These are the kind of crops that were once abundant way back in the 19th and early 20th century. So, bring a picnic and enjoy being outdoors! There’s an area here called Family Bay where visitors can enjoy performances on the multipurpose stage. Kids love the water play area and wading stream. Visit the heritage deck for panoramic views of the reservoir and a glimpse of the area’s history. It’s also a good spot for fishing, kayaking and watching dragon-boating teams practice. Believe it or not, Lee Kuan Yew had the idea to build a dam across the Marina Channel to create a reservoir way back in 1987, but the technology wasn’t available then. Two decades later, in 2008, the largest reservoir in the city (and the only one in the downtown area) opened. There’s a super interesting Sustainable Gallery to visit and even a cool model to see how the barrage actually works.

There are also plans to build the Greater Southern Waterfront, a seamless extension of the city, and open up new live-work-play opportunities.  In the meantime, the grassy area at the top of the barrage is one of the best spots in Singapore for flying a kite and to have picnics, of course. It’s also a great spot to reach on a run from Marina Bay, and is popular with office workers on a break, and inner-city dwellers. 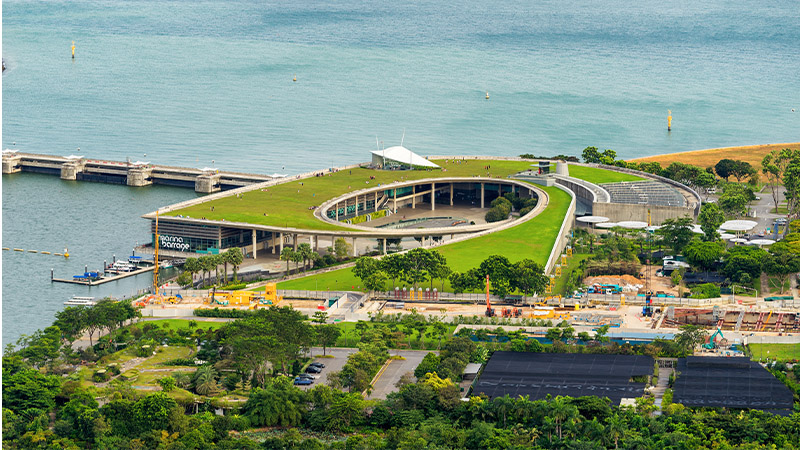 This article first appeared in the August 2020 edition of Expat Living. You can purchase a copy or subscribe so you never miss an issue!