Many expats love living in Singapore and many think about applying for Permanent Residency (PR). For more than a few, however, the one thing that stops us is that little boy we tuck into bed every night. For those expats who’ve been considering Permanent Residency – or who already have it – what are the pros and cons of Singapore’s National Service (NS) programme?

The news of Aloysius Pang’s death sent shockwaves through Singapore in January 2019, when the popular actor died after being injured during NS reservist military exercises in New Zealand. It also brought up some additional worries for NS candidates and parents alike. To help demystify the programme and provide some useful insights, we spoke with two long-term expats and their sons who have gone through (or are going through) NS. Read on for their stories, and for some relevant facts and figures to help you decide what’s best for your own son.

What is National Service?

In short, it’s a two-year conscription in Singapore’s armed forces. All male Singapore citizens and Permanent Residents must serve for two years starting at the age of 18. That means if your family wants to get PR status and you have a son, he will have to serve. And there’s really no getting out of it. Singaporeans are very proud of footballer Benjamin Davis who is playing professional soccer for Fulham, but even he is expected to serve NS. He’s now officially classified as a “National Service defaulter”. Sure, some reportedly get fake medical reports, but in general, if you are a male citizen or PR, you’re going into NS. And there have been more and more stories of men being arrested for trying to avoid it. 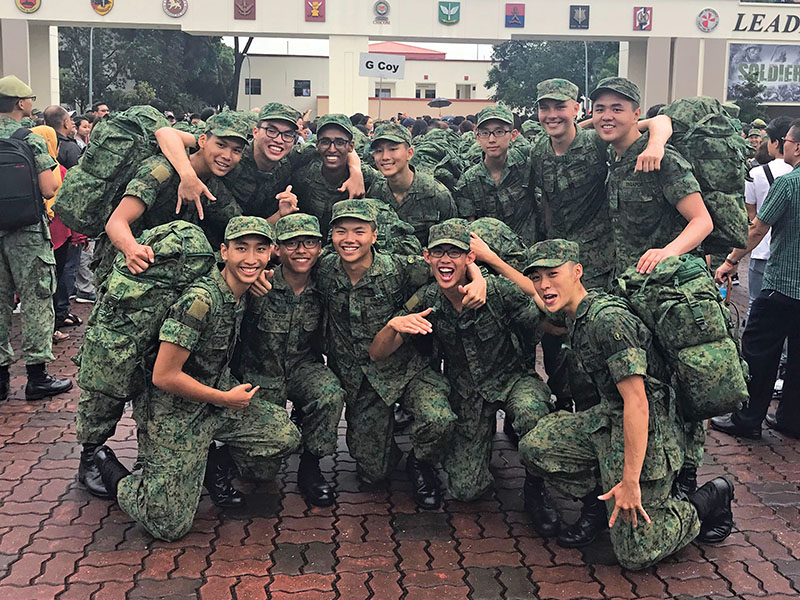 “I was worried that he would find it hard to cope with a regimented army lifestyle and tough training,” says Karin Galley, a German PR. “I was also worried that he may be disadvantaged as the only blond, blue-eyed boy in his platoon and that he may find it hard to fit in. And I was concerned whether he would be safe. Nine months in, I’m happy to say he has enjoyed the experience and has had little problems getting used to the drill.”

Karin’s son Jonathan gives his side of service: “The best aspects about NS are the things I’ve learned. I’m so glad to be able to integrate into Singapore’s society more closely, since I’ve always seen this country as my home. I’m also happy about the army forcing me to become fitter and healthier, and I hope this is a habit I will keep even after finishing my service.” What does he miss about civilian life? Sleep!

In fact, many say the habits they learn in the military really help them later in life. As Jonathan says, they are taught to stay fit, but they also learn organisational and community skills which stick with them.

“Life in Singapore for an expat kid can be pretty easy,” says Nikki Hunt, a British PR. “The army has definitely toughened up my son, James. It also exposed him to a wider range of society and community issues he was not exposed to at the international school he attended. He has left the army a much stronger person, far more disciplined, more quietly confident and more aware of the world beyond his immediate space.”

James totally agrees. Now he is more meticulous and organised, and he says he has a lot more self-confidence than before he enlisted. Of course, all those things don’t necessarily come easily. “After my basic training, I was posted to Headquarters Army Training and Doctrine Command. My boss was quite demanding, but also rewarded me when I did well. Most of the work he set involved things that I was bad at doing. I found the first six months difficult, but then it became much more comfortable. The whole experience was really good character-building.”

It’s not always easy though, watching all your friends head off to university while you head to army camp. Yet, study after study finds that delaying college can be emotionally beneficial in the end. Older students are more self-aware and confident and less susceptible to depression and getting caught up in a partying lifestyle. They also understand the value of education and take school more seriously. This is particularly true of students who take “structured” gap years, meaning time off to work or travel with a purpose. And there is nothing more structured than the military.

There are other benefits of delaying college, too. James, who is now a student at Oxford University, is glad that he didn’t go straight into tertiary education. “My time in the army allowed me to pursue my own intellectual interests and just do some interesting reading,” he says. “I completely changed directions. Without National Service, I’d probably be studying something I find a bit boring now. I also feel that going to university slightly older makes you appreciate the experience a bit more and means that you really want to make the most of it.”

Some express concerns that their son is serving in the military for a country other than their own. Yet many of these boys have lived their entire lives in Singapore so they think of Singapore as home, even though their passport says otherwise. Nikki explains, “My son was born in Singapore, and has a deep love and respect for the country. This doesn’t mean that he is not proud of his British heritage. I suppose it’s like having two parents; just because you love your mother, doesn’t mean you love your father any less. My son feels a loyalty to both countries.”

And, even though many have grown up in Singapore in a multicultural international school, they can actually know very little about the culture of this country. Serving side by side in the military often teaches them more about Singapore and Singaporeans than they’ve learned in 18 years growing up here.

There’s more that they learn, too. “There are so many luxuries that I used to take for granted, and sleeping in a hole in the rainy jungle for five days really puts a lot of things into perspective,” says Jonathan. “There are so many privileges that you first have to be stripped of in order to appreciate them. That’s why I don’t see these two years as a waste of time, but rather as a challenge that I will gain and grow from.”

But serving in the NS is not all a bed of roses. It’s tough. Really tough. Since September 2017, four men have died while serving – one from heatstroke, two from vehicular accidents and, of course, Aloysius Pang. There are also tales of horror stories that nobody wants to share on the record. Some involve injuries while others involve mental illness such as depression.

The government does try to screen men who would have a hard time serving. According to Ministry of Defence (MINDEF) figures, there’s a projected annual enlistment of about 15,000 men for NS each year. Of those, about four percent are downgraded for mental health issues during their pre-enlistment comprehensive medical exam, before commencing NS. This means they are assigned less rigorous areas of service. Of course, the screening process doesn’t catch everybody and there are some who slip through the cracks and have a hard time emotionally.

Overall, however, most expats report that NS is a positive experience and say having the right attitude going into service can make a big difference. For boys who have led a pampered life and who hate the idea of even making their bed, much less the physical challenges, NS can be extremely hard. Culture shock is an issue too. The “utopian” expat Singapore they know is not the same Singapore locals know. Things such as humour, home life, food, language and even hair colour are different. All of which can make fitting in very tough. Several even report enduring bullying because of the very fact that they are expats and Singaporeans simply don’t relate to them.

Still, all this hardship can also help develop a man’s softer side. What may be most surprising is the effect serving NS has on the mother/ son relationship. “In my son’s final year at high school, our main topic of conversation was me nagging him about his studies and university applications,” said Nikki. “It would have been sad for him to have left home with that as the overriding memory of time spent with his mother. But now I have nothing to nag about and we talk like friends. We’re much closer now that we would have been had he gone straight after IB.”

Karin couldn’t agree more. “The experience has given Jonathan a new sense of appreciation for what he has. He has become more appreciative of simple comforts such as an air-conditioned bedroom, home-cooked food and a hot shower. He has become more communicative and disciplined. I’m particularly happy to say that I’m getting a lot more hugs than before – plus, I get him for two more years on the weekends before I’m a true empty-nester.”

It seems the army turning her son into a man has given each of these women more time rediscovering the little boy inside. • Every male Singaporean citizen and Permanent Resident must serve two years in Singapore’s military and associated agencies. At the age of 16.5 years, he must register, and then he must enlist at the age of 18.

• From 16.5 years of age, a bond is required for those who remain overseas for three months or more in the form of a Banker’s Guarantee. The amount? S$75,000 or an amount equivalent to 50 percent of the combined annual gross income of their parents, whichever is higher.

• Singaporeans and PRs evading NS can face a stiff fine, jail time or both. The longer you evade NS, the harsher the sentence, with a three-year maximum jail time and maximum $10,000 fine; if you posted a bond, it’s forfeited.

• People who renounce Permanent Residency without serving NS will face consequences should they want to return to work, study, or live in Singapore or wish to be granted Permanent Residency/Singapore Citizenship again. Their parents’ ReEntry Permits may also not be renewed.

• For 10 years after completion, boys must serve additional time in the Operationally Ready National Service (ORNS) of up to 40 days a year.

• Men serving NS do receive an allowance (known as NS pay), which varies greatly depending on rank and time served.